Feb. 14, 2020 – On the first day of the 49th FIL World Championships in Sochi, Russia swept gold in all three disciplines of the sprint competition, though none of the races were a cakewalk.

In the doubles race, Aleksandr Denisev & Vladislav Antonov rallied from the slowest start speed of the race to edge Italians Emanuel Rieder & Kainzwaldner by .045 in what was the largest margin of victory on the morning. 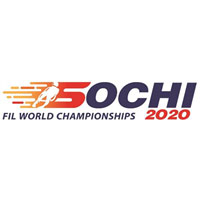 Tobias Wendl & Tobias Arlt finished third, edging out German teammates Toni Eggert & Sascha Benecken by just .001 for the bronze medal. Russians Vsevolod Kashkin & Konstantin Korshunov finished only .003 behind Wendl & Arlt. Vladislav Yuzhakov & Iurii Prokhorov rounded out the top six, with all six sleds finishing within a tenth of a second of each other.

The American team of Chris Mazdzer & Jayson Terdiman finished ninth. Canada is not participating in the World Championships this season.

In the women’s race, Russia went one-two, with Ekaterina Katnikova winning the Sprint World Championship over Tatyana Ivanova by just .008. Katnikova’s start speed was 5 km/h slower than Ivanova’s, and while both women looked to be nearly perfect on their run, Katnikova found speed at the bottom of the run to finish just ahead of her teammate.

Eliza Cauce finished third for her first World Championships bronze medal, just ahead of Germany’s Julia Taubitz in fourth. Viktoriia Demchenko finished fifth, only .031 out of the medals. Latvia’s Kendija Aparjode rounded out the top six.

The United States’ Summer Britcher finished seventh after qualifying tenth for the sprint competition. Teammate Ashley Farquharson finished just out of the top ten in 12th, while Brittney Arndt finished 18th in the one-heat qualification race and missed out on the World Championship race.

In the closest race of the day, Roman Repilov edged out Olympic champion David Gleirscher by just .006 on his way to gold.

The Russian had the fastest start speed of the race, and was the quickest at every timing split on his way to victory. Gleirscher, on the other hand, was as far back as sixth at one point before finding speed to finish second, .052 ahead of Italian Dominik Fischnaller in third.

Russian Aleksandr Gorbatcevich finished his run in third place, but was bumped by Gleirscher one sled later, and had to settle for fourth. Jonas Müller finished fifth, while Maksim Aravin finished sixth.

No American qualified for the Sprint World Championship, with Jonny Gustafson missing out on the sprint by just .043. Chris Mazdzer finished 19th in the one-heat qualification race, while Tucker West finished 24th.