Feb. 28, 2020 – Marina Gilardoni has struggled with injury over the past few seasons. Over the 2019/2020 season she showed that her form was back, and in the first two heats of the 2020 World Championships Gilardoni showed that she’s stronger than ever.

In the first heat Gilardoni combined a great start and slide with favorable weather conditions to open up a .31 second lead over Elena Nikitina. On her second run she opened that lead over the 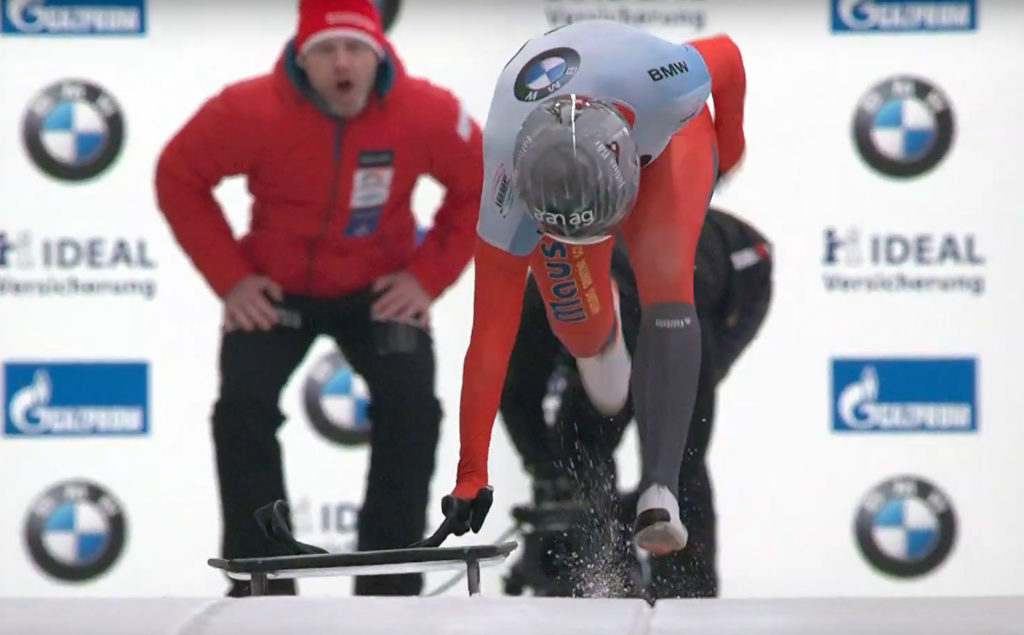 field up to .63 into the overnight break.

Behind the Swiss slider, Tina Hermann showed why she is the defending World Champion with a huge second run to move up from fifth into second, .16 ahead of Nikitina in third.

If Gilardoni can hold on, she’ll become the first Swiss woman to win a skeleton World Championship since Maya Pedersenin 2005.

Janine Flock will go into the third heat in fourth place, only .01 ahead of 2019/2020 World Cup champion Jacqueline Lölling. Czechia’s Anna Fernstädt is sixth.

Canada’s Jane Channell came into the second heat in third, but a hard hit early in her second run dropped her down to eighth. Teammate Mimi Rahneva is just two spots back in tenth. Both women are in a position to possibly move up in the second heat.

Kendall Wesenberg led the American effort going into the overnight break in 11th place. While she didn’t pick up any positions in the second run, she did close to within .05 of Rahneva in tenth. Behind her, Savannah Graybill finished her first two runs tied for 18th with Italy’s Valentina Margaglio, while Megan Henry finished her second run in 20th.

It was a tough first day of sliding for Great Britain. Larua Deas led the way with a 17th effort as the only British slider in the top 20.  Both Madelaine Smith and Kimberley Murray had bumpy first runs, leaving them in 26th and 28th after the first run. Smith’s second run moved her up to 22nd, while Murray’s moved her to 24th.

Australia’s Jackie Narracott had a hard hit in her second run, which dropped her from 21st back to 27th

Alessia Crippa’s chinstrap came off in her hand while she was putting on her helmet at the start and was initially ruled as a “DNS” as she couldn’t get a replacement helmet in time. She was later allowed to go off last while wearing a loaner German helmet. Earlier in the week Laura Deas cracked her helmet in a training run and was also given a bright orange helmet by the Germans so she could continue racing in the World Championships.

The third run of the women’s skeleton World Championships will start at 3:30 AM Eastern, with the final run set for 5:00 AM.